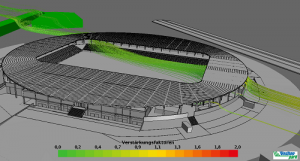 The NV Arena is home of the National Football League Club SKN St. Pölten and offers 8000 roofed seats. As there has often been a strong draft in the stands, Weatherpark was commissioned to develop windscreen measures. Based on generated wind simulations, Weatherpark defined the best position for wind protection meshes together with the client and a sports facility expert. 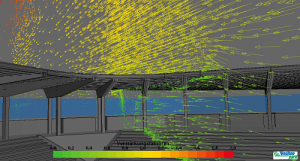 The meshes prevent the frequently occurring wind from southwest from blowing below the roof of the stadium and in parts of the stalls. Instead, the wind will be deviated and thus blow over the roof.

Capacity of 8.000 spectators
Among the 25 largest football arenas and the 30 largest sport stadiums in Austria